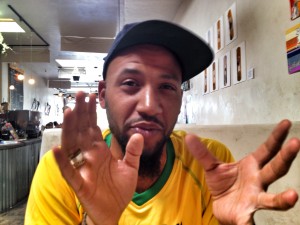 Justice is another one of our up and coming artists, active on many fronts of new media and music making. He’s a DJ, composer, and teaches film production at Santa Fe University of Art and Design, where he recently wrote and directed Trauma Cycle.33,. This is an experimental narrative about veterans with PTSD. Before moving to New Mexico, he worked in New York City high schools as a film teacher, media coach, and soccer coach. He is currently the girl’s soccer coach at Desert Academy. His work includes What to the American Slave is the 4th of July, an interpretation of the Frederick Douglass speech. He directed Aqui en Cuba, which profiles Cuban artists and activists, produced with a grant from the Fund for Teachers. His commitments are focused on bringing voice to under-represented communities through film and media. Be sure to see his reel!